There are several commercial ancestry tests that list “Native American” as an ethnicity category they test for. However, direct-to-consumer ancestry tests may be less reliable when it comes to determining Native DNA than you might expect. There is no specific Native American ancestry test, and each company uses different reference populations with different genetic markers for their tests.

When an ancestry DNA test lists “Native American” as a category, this category is generally very broad. Often it includes native peoples from all over the Americas, and mostly from South or Central America. There are not many people of North American Native ancestry in DNA databases, since Native people residing in the United States may be distrustful of private genetic companies, and unwilling to share their genetic information with scientists unaffiliated with any tribe.

The practical implication of this is that there are not enough people of Native American ancestry from the United States in ancestry databases to create a reference population. While some tests may distinguish between Native peoples from North America, and South and Central populations, they are unable to distinguish between tribes.

It is likely that if individual tribes did have their DNA sequenced/genotyped, then they may be too genetically similar to really distinguish, due to a tradition of adoption and absorption between tribes. As a result of colonialism, intermarriage, and intermingling, it is also likely that the DNA of enrolled tribe members would not be exclusively “Native”, since they would also have European, African and Asian ancestry. For instance, when the members of the Seaconke Wampanoag tribe in Massachusetts had their DNA tested, it was found that they also carried European and African ancestry.

Genotyping / SNP Testing
All the major ancestry testing companies today perform what is called genotyping or SNP testing to analyze our DNA. “SNPs” (pronounced snips) are “Single Nucleotide Polymorphisms” – changes of a single letter in the jumbled ACGT alphabet of our genes.

When we send our saliva samples off to 23andMe or AncestryDNA, our DNA is compared to a reference genome to look for specific SNPs: variations in our genetic code which affect traits such as height, eye color, skin color, and hair texture. The purposes of most of these genetic variants are not yet known. However, certain variants are more characteristic of some global populations compared to others, and so can be used as ancestry markers.

The SNPs or genetic variants that these ancestry companies analyze are found in our autosomal DNA. That is, the 22 out of our 23 pairs of chromosomes that have nothing to do with genetic sex determination. The variations found in our autosomal DNA can reveal our recent ancestry up to about 10 generations back. We inherit our autosomal DNA from both of our parents, approximately 50% from each. The half of our parents’ DNA we inherit is random, which is why if we have siblings we are not exact replicas of them (excepting identical twins!).

This also means that siblings can inherit different ancestry markers: your sister’s ancestry DNA test may show she is 15% Native American, while you may only show as 7%.

Maternal and Paternal Haplogroups
Another sort of DNA ancestry testing is haplogroup testing. This looks at your maternal and (if you’re genetically male) paternal ancestry.

Maternal haplogroup testing looks at your mitochondrial DNA (mtDNA) which we all inherit from our mother. As we all have mtDNA, both women and men can take maternal ancestry tests. MtDNA doesn’t mutate often, and so the mutations that we have can be used to trace the migrations of our maternal ancestors out of and within Africa.

Paternal ancestry tests can only be taken by those born genetically male, since they test the DNA contained in the Y chromosome, which men inherit from their father. (However, women can find out about their paternal ancestry through their male relatives.) Like mtDNA, Y-DNA doesn’t mutate often, and so variations in Y-DNA can be used to track the migrations of your paternal ancestors.

Of course, since mtDNA is shared only by your direct maternal ancestors (mother’s mother’s mother, etc.), and Y-DNA is shared by your direct paternal ancestors (father’s father’s father, etc.), these can only trace two lines of your family tree, and exclude all your other ancestry. Taken without an autosomal SNP test, your haplogroups won’t reveal much about your recent ancestry.

Therefore, even if you do have Native American ancestry, your haplogroup won’t always reflect this. You might, for instance, have a Cherokee grandmother, but if she is your father’s mother, then you and she will not share a maternal or paternal haplogroup.

DNA Fingerprinting / STR Testing
Very few companies use STR markers for ancestry tests. Companies that do often market their tests as “DNA Fingerprint” tests. “STR” stands for “Short Tandem Repeats”, i.e. sections of your DNA that repeat themselves in a unique and identifiable pattern.

STR testing is most commonly used for familial relationship tests (such as paternity tests) and for forensic DNA profiling. These markers can identify individuals and relationships between individuals, but the genetic information contained in the genes themselves is not analyzed.

Some STRs have been identified as belonging to global populations. However, STR ancestry tests reveal very limited information. Typically, these tests will only reveal what percentage African, Asian, European, etc., you are, without narrowing down to specific countries or regions.

This may not be the level of detail you are looking for, but for many people, having a percentage result for “Native American” in their DNA test results can be all the confirmation they need of long-held family lore. It is possible that as more people enter into databases – including people of Native American ancestry – the test results will become more detailed and exact.

Can you apply for tribal enrolment on the grounds of a DNA test?

Certain tribes do allow for enrolment if you take a DNA test with an enrolled member, and are proven to be related to them to a degree that means you meet the “blood quantum” for that tribe. Not all tribes allow for enrolment on the basis of a DNA test, and so if you do wish to enroll into a tribe, you will need to check their specific requirements.

Currently, no tribes allow enrolment on the basis of the results of a commercial ancestry test such as AncestryDNA. This could be because the results of these ancestry tests cannot be independently verified, or because of the lack of North American Native DNA in ancestry databases. The fact that ancestry tests can’t distinguish between tribes means that people who cannot name their Native ancestor or the tribe they belonged to will not even know which tribe they ought to apply to.

Membership of a tribe is not purely genetic, and historically has very little to do with blood relationship. Before the introduction of the “blood quantum” (the minimum amount of Native ancestry you must have to be enrolled into a tribe), members were often adopted into tribes, married into them, or absorbed into them.

Today, there is debate about whether – or how much – your genetic heritage matters in terms of tribal membership. It may be that tribes are reluctant to accept new members on the basis of an ancestry test – even if the results are believed to be accurate – because these applicants are unaffiliated to the tribe in any meaningful way. Applicants are often raised and live without any Native cultural influence, though this is probably less important than the fact that applicants who have only taken a DNA test have not contributed to the tribal community, and so don’t have any connection other than a potential genetic one.

So, how can I apply to be a member of a tribe? 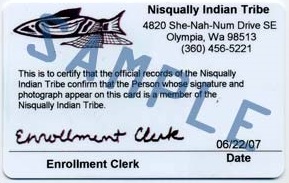 An ancestry DNA test can provide evidence of Native ancestry for your personal information. If you wish to become a member of a tribe, you will usually need a CDIB card (“Certificate Degree of Indian Blood”) issued by the US government. This certifies that a person possesses a percentage of Native American blood, identified as belonging to a federally recognized tribe. You may also need to meet a blood quantum requirement, which differs between tribes. Often, you will need to prove you are ¼ Native American (i.e. that you have one Native American grandparent). The connection will have to be proved either through documentation (birth and marriage certificates, proof of your ancestor’s membership, etc.), or through DNA testing with an enrolled member.

You may have taken an ancestry DNA test that suggests you have enough Native American DNA to meet blood quantum requirements. However, if you are unable to pinpoint the tribe your ancestor belonged to, or to name your Native ancestor, then you will not be able to enroll. This might be frustrating for you, but it is important to bear in mind that membership of a tribe is not owed to you.

Of course, even if you don’t meet the requirements to enroll in a tribe, or to apply for a CDIB, you are free to self-identify as Native American, or partly Native American, at your own discretion.

I have had a hard time with getting my roll number through my Grandmother’s side and Grandfather. I have roll numbers census, marriage certificate death certificate and still the Bural of Indian affairs continues to ask for more. I have documentation way back to the 1700 , I am at a lose in red tape that makes no sense to me. Knowing that I have researched all aspects, my father and grand parents on both side have passed. I will not give up it’s my identity that I know I am American Indian all I want is my birth right for generations to come my grandchildren @greatgrandchildern.

Family photos and history affirm my Great-grandmother’s Native American ethnicity. But, neither of the 2 DNA tests I took affirm this (FamilyTreeDNA, and Ancestry). I realize the random DNA handed down by my Father may have excluded this trait. Here’s my question: Is there any point in taking a test with another company, such as CRI Genetics… or 23andme? Thank you!

I am about 1/4 American Indian, I was adopted @ birth. My adopted Parents were told by the adoption agency that my bio father was French Canadian, MicMac Indian Chief & my bio mother was English. But the way the % comes out, looks more like it was my G-Father that was the Indian Chief.
Would I be able to get in their reservation on Prince Edward Island, Canada?