Overview
Britains DNA provide one of the most advanced genetic testing services in the world. They can trace a person’s genetic inheritance through a DNA test, referencing scientific and historical data to help them understand their ancestral past like never before.

Writing Britain’s History
Thousands of years ago our ancestors departed from Africa, and as each population group migrated across the continents, markers arose in their DNA to distinguish them. This means that markers can be identified in an individual’s DNA to trace the migratory paths of their ancestors.

Since 2012, Britains DNA has focused on genetic testing methods that incorporate historical analysis and the collective data from ancestral DNA testing. This is a new and innovative approach to understanding the origins of the British population.

In recent years DNA testing to identify an individual’s genetic make-up and ancestral background has become significantly more advanced. By collating DNA testing data from thousands of individuals living in Britain, with the genetic records of past and present population groups from around the world, a genetic map can be created that effectively details Britain’s history. From identifying links to Siberian, African and Indonesian populations, to the dominant global rulers throughout history – such as the Romans, Anglo-Saxons, Danes and the Vikings – a DNA test can reveal the ancient genetic origins of the British people, and put it into a historical context.

Britains DNA is currently tracing Britain’s past and present through a national DNA testing project, building on the history of the British people through their genetic make-up, and mapping the ancestral heritages that define them.

Fatherline tests allow an individual to trace their male ancestry by analysing the Y chromosome markers passed from father to father to father and so on – only males can take this test as females don’t carry a Y chromosome. Motherline tests allow an individual to trace their female ancestry by analysing the mitochondrial DNA markers passed from mother to mother to mother and so on.

Males can opt for a ‘just markers’ DNA test which analyses the same 15,000 Y chromosome markers as the Fatherline test but does not provide a historical interpretation. 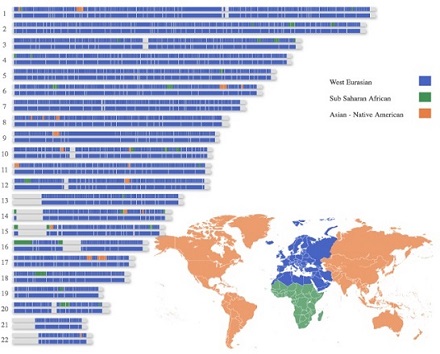 For the All My Ancestry test, Britains DNA can show which populations a person is genetically closest to, and what proportion of their ancestry arose from each of seven continents. The results are provided as a ‘Global Connections Plot’, a ‘Population Percentage’ report and a ‘Chromosome Painting’.

The Red-Head test will tell a person how many copies of the ‘red head’ gene they carry, if any.

Chromo2 Complete tests combine the Fatherline, Motherline, All My Ancestry and Red-Head tests at a discount.

Summary
Britains DNA are one of the newest companies to undertake DNA testing and one of the few that focus on the ancestry of British individuals, and of those descended from the British population. They use the latest genetic testing techniques and are renowned for bringing an individual’s genetic past to life with a vivid ancestral narrative. Of all the genetic ancestry providers out there, Britains DNA are one of the most accomplished in terms of presenting their results in a simple and visually appealing format.